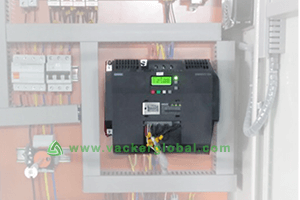 Our companyVacker South Africa has been supplying various types of Mechanical equipment such as Variable frequency drives (VFD) of optimum quality made with the most sophisticated engineering for cranes, different machinery and hoist, etc. Our variable frequency drives which are also commonly known as AC Drive or Variable Speed Drive are all been designed to meet all the industrial standards. With many choices of models on offer, we have been able to win the priceless trust of our customers. That is why we are proud to claim ourselves to be the best in the business.

You can order our products online in different cities of the Africa region as we have a widely spread network in the region. Some of the cities include Johannesburg, Cape Town, Soweto, Port Elizabeth, Pretoria, Durban, etc. Our variable frequency drive is very easy to install and is made of rust proof material. The sturdiness of the device is another commendable feature. Our VFD is non-corrosive and practical in size. Practical in size means that they are designed in such a way that they occupy the least space possible.

A variable frequency drive is a device that is capable of changing the frequency of motor input and voltage to control the speed and torque of AC motor. These VFD devices are helpful in energy saving especially in large machinery as VFD can vary the pace of AC motor according to the requirement. This has been helpful for the users in saving huge amount of money in the industries.

These devices actually come in handy when the speed of an AC motor requires being slowed down. The VFD will simply decrease the frequency and voltage of the electric circuit which in turn slows down the speed of AC motor because frequency is directly proportional to the Speed of the AC motor.

As discussed earlier VFD helps to maintain the speed of the AC motor at such level that it meets the load requirement of the system. This, in turn, results in significant cut in energy consumption as the device may not always be required to run at full speed.

Our modern industries use AC motor more than ever as recent studies concluded that more than sixty percent of energy is consumed by AC motor system in industries. Hence it becomes more necessary to install VFD in industries. Recent industries have shown that VFD can reduce more than 65 percent of energy consumption in an industrial plant. This has resulted in decrease in the energy cost along with the production cost in an industrial plant.Vacker South Africa supplies various Mechanical Equipment to meet the needs of our customers.

The VFD also helps to increase the lifespan of the machines in which it is used. They help to prevent thermal overload, under voltage, over voltage etc. in the machine and protect it from potential damage. It also prevents shock in the system which is caused due to the direct connection of the machinery to the electric circuit. You can easily increase the efficiency of an industrial plant by the use of VFD. The VFD are easy to integrate into an electric motor system and really does not need special training.

This website uses cookies to improve your experience while you navigate through the website. Out of these, the cookies that are categorized as necessary are stored on your browser as they are essential for the working of basic functionalities of the website. We also use third-party cookies that help us analyze and understand how you use this website. These cookies will be stored in your browser only with your consent. You also have the option to opt-out of these cookies. But opting out of some of these cookies may affect your browsing experience.
Necessary Always Enabled

Any cookies that may not be particularly necessary for the website to function and is used specifically to collect user personal data via analytics, ads, other embedded contents are termed as non-necessary cookies. It is mandatory to procure user consent prior to running these cookies on your website.